Soybeans have been an integral part of Asian cooking since ancient times. The Chinese refined and disseminated the secrets of soybeans fermentation into savory food flavoring agents. From the Natto in Japan to the Indonesian Tempeh, Soybeans are in the roots of Asian cuisine.

In the northern parts of Thailand, the home of the gentle Lanna cuisine, we can find yet another type of fermented soybeans product called Tua Nao.

Tua Nao originated from the ”Tai Yai” (ไทยใหญ่ Shan people) and “Tai Leuu” (ไทยลื้อ) minorities, who inhabits the Burmese and Thai territories of the north-western part of the Kingdom.

In the Tai Leuu dialect Tua Nao refers to Tua Oh (ถั่วโอ่) which simply translate to as bad odor beans.

Making both types of Tua Nao starts with the boiling of soybeans in brine for 4-6 hours. The soft beans are than pounded smooth in a wooden mortar and pastel and let to ferment for 2-3 days.

At this stage, the paste is sometimes lightly seasoned with salt and chilies. The paste is than hand formed into flat cakes.

To make the wet type, the flat cakes are wrapped in banana leaves and grilled over open fire, whereas for the dry variety the cakes are left to dry in the sun.

Before using Tua Nao in food preparations the cakes are lightly grilled and pounded to a fine powder. 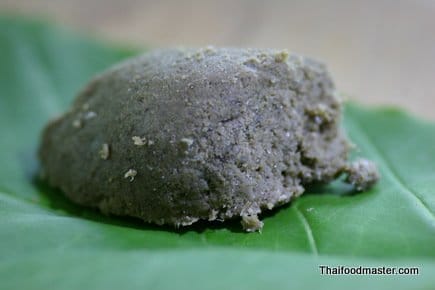 It is thought that gabpi maawn was introduced to Thai cuisine by the Mon people, an ethnic group of Burma.

gabpi maawn is made from the flesh of small fresh water fishes, such as Thai river sprat (ปลาชิว) and Siamese mud carp (ปลาสร้อย). The fishes are sun dried and then finely pounded. They are left to ferment with salt for a minimum of one month. Curry shops are for the busy businessman and the hungry traveler a real must. They offer a selection of the most attractive and appetizing food you can think of. This is the Thai version of fast food, even faster than in the west.

So here is a wonderful little lunchtime dish that goes well with yet another bowl of steamy hot rice, that comes of directly from the curry shops common repertoire.