Tom Yam is a type of soup with distinct sharp hot and sour flavors, scented with pleasant citrusy aroma.

Tom Yam is known to seduce many westerners to fall in love with Thailand, its people and food. Many trips memories to Thailand were written in diaries, others are etched on film but all are stained by the Tom Yam charm.

I still remember with vivid colors my first bowl of Tom Yam, in the night market of the old neighborhood on a hot night in a ragged, unfashionable part of Bangkok. Where the smell of cooking and the glare of florescent lights decorated the alley where JeMoi used to own a restaurant, a very simple and very good one, decorated with cheap bamboo chairs and peeling orange walls. I would enjoy watching the streets of the early night turning into mornings, eating, drinking and sweating. It was hard to say if I was sweating from the hot and humid weather, the cheap whiskey or JeMoi’s spicy food. I still smile when I think of her, standing by my table with a winning smile, as if she knew how much I enjoy the food.

Tom Yam is considered the best-liked Thai dish by westerners, is more than just a dish really; It is a full chapter of Thai cuisine with many recipes and a spectrum of variations.

Over time, I will list here different versions of Tom Yam.

The Scholar and Astrologer Prayoon Uroochata (Born 1921) said that Tom Yum has originated during the Ratanakosin period, which began with the founding of Bangkok as the capital in 1782.

It is not certain though if at times Tom Yam was part of the Royal Thai cuisine. King Rama II, in his “Boat epic poems” described incomparable dishes and arrangements at the hands of his queen. The poems are in praise of dishes, fruit arrangements, desserts, and significant occasions marked by the royal barge processions – neglected to mention Tom Yam.

It is only in “Suphasit Son Ying” were the poet Sunthorn Phu (1786-1855), the Shakespeare of Thailand, describing the ability to prepare Tom Yam as part of the desirable qualities that adds charm to a woman.

We can find written evidence that during the reign of HRH King Chulalongkorn the Great (Rama V, 1853 – 1910), Tom Yam has became part of the Royal Thai cuisine. It is described how a governor of a remote province welcomed the King with a meal that included Tom Yam.

Thai used mostly with Fish, Dried fish or fish heads in the preparation of Tom Yam. In the early days, the markets did not offer shrimp at wide variety and affordability of today. 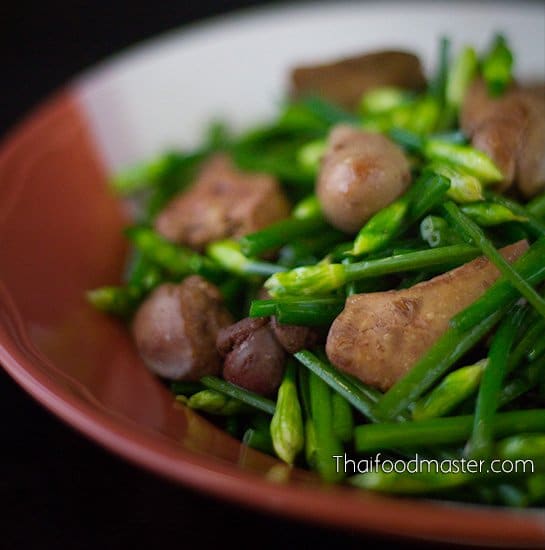 A quick and tasty dish from the hot mouth of the dragon with only three ingredients! Flowering Chives, Pork Liver and Garlic.

Flowering Chives are all year round favorites for their mild garlicky flavor, and can be purchased inexpensively at almost any Asian market.

In Thailand we like to fry them with pork, pork liver or shrimp. These flowering chives are actually the unopened bud stems of garlic chives, also known as Chinese chives. 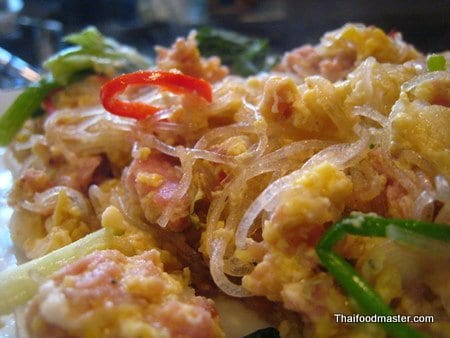 Cured pork is made by fermenting a mixture pork meat, cooked pork skin julienne, salt, garlic and cooked sticky rice wrapped in banana leaves. During the summer we leave the wraps unrefrigerated until a rich savory and slightly sour flavor develops. This method of preserving meat goes back to the days before refrigeration was widely used.
In this Northern style recipe I use homemade cured pork, though any commercial product from your local Asian store will do just fine.