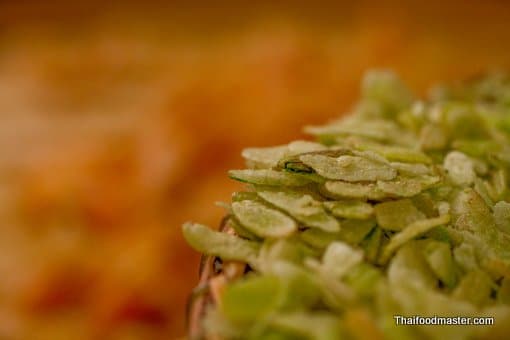 This ball-shaped dessert has a sweet coconut filling (gracheek), surrounded by a thin crust of pounded unripe rice crumbs, along with a tempting fragrance enriched with a Thai dessert candle or fresh flowers.

Demonstrating brilliant creativity and attention to detail, this classical Thai dessert uses only three basic ingredients. In this article, we have elected to follow the traditional recipe published in 1908 by Thanpuying Plean Passakornrawong.

Sweet Pounded Unripe Rice Flakes Cereal – Rice harvesting takes place only once a year, and there are only two weeks where the ripening grains are suitable for producing Khao Mao. Khao Mao doesn’t age well, it gets dry and tough quickly. The-once-vivid beautiful green color that portrayed the essence of its immaturity and the beginning of the rice harvesting season, slowly fades away, along with its bread like scent.

Unripe rice snack – “Khao Mao Mee” (ข้าวเม่าหมี่ ) also known as “Khao Mao Song Kreuang” (ข้าวเม่าทรงเครื่อง) or by it’s royal name “Khanom Khao Mao Rang” (ขนมข้าวเม่าราง) is a delicious snack. It makes an unusual use of the unripe rice grains, which are normally used for desserts making. The following recipe describes an ancient and hard to find version of it. These days, there is a tendency to add other ingredients like peanuts or to deep fry the unripe rice grains until fluffy and crispy.